How to Use EdTech for International Collaboration 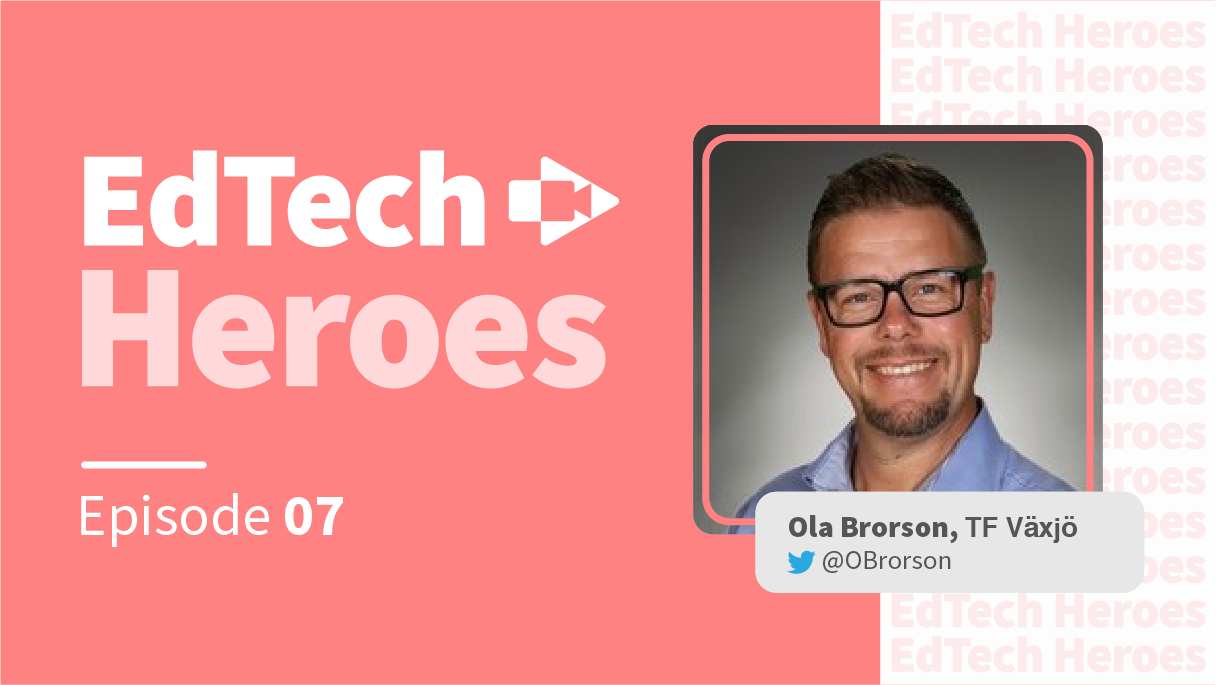 On the latest episode of EdTech Heroes, host Nef Dukes talks with Ola Brorson, an English teacher in Sweden, about how technology’s dynamic capabilities are changing what education looks like today. They also discuss how Ola uses technology to connect his students with other students worldwide and the importance of using technology to learn with your students.

👨‍🏫 What they do: Ola teaches English as a second language in Sweden.

✍️ Noteworthy: Ola’s English students have partnered with students worldwide, including students at Kansas State University (since 2014) and students in France and Miami, Florida.

Since it’s not static, technology changes everything, including what school should look like. When he first contacted a tech company to praise their program, he realized he could give them feedback on making it better. Soon his students were using Screencastify to contact companies about mistakes in their programs. “It gave me confidence as a teacher to work with technology and understand that it's a different ball game because you can change everything, you can improve everything, and it's not static in that sense. That has really changed the way the world works and the way classrooms should work,” Ola says.

Give the students freedom to explore and prepare for the unexpected. Ola frequently asks students what they want to do and how they want to incorporate technology. His students have come up with some pretty exciting things ranging from writing and recording a podcast on Spotify to learning about the difference between American and Swedish engagement rings. “A lot of things that have come out of my collaborations with other schools and other countries were not planned. One of the Swedish girls asked a K-State student who had gotten engaged about American engagement rings and compared them to the Swedish ones. Someone else talked about cooking, and they shared recipes. I didn't give them instructions to share recipes, they just did it,” he says.

EdTech connects students with other students around the globe, illustrating that we aren’t that different, which is powerful and essential in an increasingly divided world. Ola’s students have worked with other students worldwide, sometimes just over a Google Doc or through video recordings. However it happens, these connections allow students to learn authentically about other cultures. “What the world needs now, more than ever before, is for people to meet and talk to each other and find that we are all the same. Everyone enjoys looking at a positive future, hanging out with friends and family, and eating food. Everyone around the world wants to do that. As teachers, the most important thing right now is to have a positive attitude towards that,” Ola says.

🤔 Being future-oriented means preparing students to fail so they know how to get back up. Of course, part of that also means being ready to fail in front of your students.

“We're not afraid to fail, and we are allowed as teachers to tell the class, ‘You know what? We tried this for two weeks now, and it didn't work out.’ So I have great confidence, and that gives my kids confidence.

It's an important part of school to [say,] ‘I can do this. And if I fail, it's okay.’ That's one of the most important things to give kids in school — to believe in them as a teacher. So there should be a lot of room for failing in school and learning. That’s what school is about.”

🎬 Asking students to record videos helps them feel safe, so every voice is heard and not just those comfortable speaking in front of the class.

“I tell them, ‘This is just going to be me listening to this. Talk to me like it's just a conversation between the two of us.’ In the classroom, maybe three or four people raised their hands and were active. But by doing this, everyone becomes active. Everyone's voice is heard.

It happens every year that I can't get a student to be productive. And then, when they sit at home, they have a cool headset on — maybe their gaming headset — they're in their safe zone, and I’m just blown away.

💡 Let students use tech to help them problem-solve and express what they know and can do.

“One kid would explain, ‘I'm sorry that I can't do this on my Chromebook. I used my phone instead.’ That’s problem-solving. I think people these days are used to the video format, and we should do that in school.

I think school is super focused on academic skills, but not everyone works at universities. There are other jobs. If students are not very strong at written English, but they're good at speaking, or with their hands, or they can use props or whatever, [using tech] allows them to show their skills.”

🙋 Students should have a voice in how tech is used. This leads to exciting results, like students doing work because they enjoy it not just for a grade.

“[I asked,] ‘How many of you listen to podcasts?’ A lot of them did. So they already had role models on how to do this and I didn't have to teach them. [...] A lot of them had these skills already. We actually ended up with two full episodes on Spotify. Now it's my second year with ninth graders, and I have a fishing show that is out right now.

The kids asked, ‘Can we do this at home?’ Think about that. Did you ever ask a teacher when you were in school, ‘Can we do extra schoolwork at home?’ They didn't ask me for grades!”

⚡️ When you start incorporating technology into your classroom, ask for help from people outside the classroom or even your students themselves.

“[Start with] what do you want to do? I like when I come up with things myself and then find someone I can work with, instead of someone telling me I should be interested in this.

So I think you just go with what you want to do and how you can engage your students. [Don’t] think about whether it has ever been done before, or if this would be cool to do. Ask the students instead. I do that all the time. They say the craziest things.”

[1:45] “I like starting conversations with, ‘Hey, let's do something fun together.’”

[29:14] “Don't think about what you're going to say in the next tweet. Be present right now and enjoy the moment. Enjoy being in the classroom.”