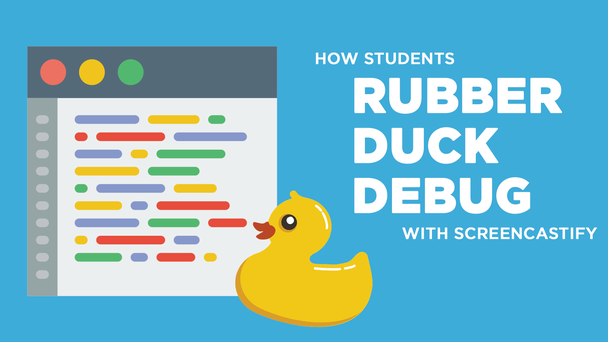 This is a guest post by Sam Hankin, a computer science teacher at The Priory School, a secondary school in the UK.

As a Computer Science teacher, I used to struggle to evaluate student pieces of code in an effective and efficient way. Sometimes, I had no idea whether the student had just typed code into the computer because they were told to or whether they actually understood what they were creating.

To give appropriate feedback and help improve student coding skills, I needed to find a way for my students to show me what they’d created and explain how they went about doing it.

After some online research, I came across Screencastify, which allowed students to easily present evidence of their coding work via a screen capture video, and then submit it directly to me via Google Classroom.

Along with the video of the code, students also have the opportunity to talk through what they’ve done, or do some ‘Rubber Duck Debugging’.

If you’ve never heard of the term ‘Rubber Duck Debugging’, it’s essentially the idea of explaining your code line-by-line as you would to a rubber duck.

Why does Rubber Duck Debugging work?

When you explain something out loud, you’re likely to go over it more slowly. As a result, you’ll be able to spot more mistakes, allowing you to fix the ‘bugs’ as you go.

Not every program has bugs, but simply explaining how your code functions out loud (to your imaginary  rubber duck) will help with memory retention of the coding skills you’ve developed. If you’re required to fully explain your code out loud, you need to have a deep understanding of what it does. And you can’t just copy and paste a code solution from Stack Overflow!

Where does Screencastify come in?

When starting out as a Computer Science teacher, I found there were two common ways to gather evidence of coding projects students produced in lessons and for homework:

Screencastify had the answer

In this video, one of Sam's students uses Screencastify for 'Rubber Duck Debugging'.

So does it actually work?

Well so far, yes! I’ve only been using Screencastify for less than a year but…

This technique is not just limited to Computer Science. Using Screencastify to allow students to record their own work is endless – CAD design work in Technology, building a score in Music, exploring places using Google Maps in Geography, improving internet research skills in History, or story structuring in English.

Students can do their work normally on the computer, then record a screen capture video explaining what they’ve done to their teacher. The student has a deeper understanding, and the teacher can review their work & feedback in a fraction of the time – it’s a win for everyone!

See more from Sam Hankin by checking out his website or by following him on Twitter @hankin.

Contributor to the Screencastify blog.